Radio New Zealand has recently criticized a Facebook live conversation between former National MP Matt King and epidemiologist Dr Simon Thornley. While people should undertake their own research, we provide some comments related to the media’s critique. The evidence related to covid-19 policy continues to change and be updated.

In the interview, Professor Rod Jackson made several claims, decrying Thornley personally during the interview. Let’s examine them in turn.

Trials do exist. In fact a meta-analysis or summary study of six such trials exist. The pooled effect of these trials is a 79% decline in all-cause mortality (95% confidence interval: 89% to 58%). These trials are from Iraq, Iran, Bangladesh, Egypt, Turkey and India, places less reticent about its use. But they are trials, and the reduction in all-cause mortality is stark, an endpoint which is generally considered clinically important and free of error and bias. Another trial points to effective treatment, such as from vitamin D supplementation, which reduced intensive care admissions to 1/50 (2%) in the treated from 13/26 (50%) in the untreated in Spanish covid-19 patients.

We’re not advocating ivermectin at all. But we are prepared to look at the evidence. The fact that Jackson didn’t know there were trials invalidates his point.

The fatality rate for H1N1 influenza is variable, but this figure from covid-19 is well within the range of estimates presented from a similar summary study.

The comparison between covid-19 and flu is therefore fair and accurate. Jackson’s claim is misinformation.

We should note that many fatality studies take the definition of a covid-19 death at face value but it does not mean the individual died exclusively from the virus. This was exemplified by the counting a recent covid-19 death in a man who was actually shot and killed, yet tested positive for SARS-CoV-2 during the autopsy. This was defended by the Ministry of Health, as it conformed with World Health Organization policy.

We are able to test the accuracy of Jackson’s claimed fatality risk. In May 2020, Jackson admonished Sweden for its lax approach. He said the fatality rate of covid-19 was 1/100 people infected, so predicted 56,000 deaths from covid-19 in the country, assuming 60% of the population would be infected. To date, there have been about 15,000 covid-19 deaths, with an age distribution similar to that of background deaths (figure). In fact, by all accounts, Sweden has fared through the epidemic particularly well compared to other European countries. 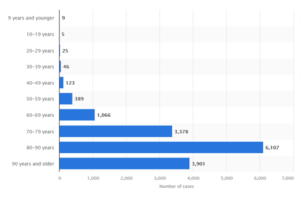 Given the numbers of deaths in the original trial, it is possible to work out whether the trial would have picked up a 95% reduction as Jackson claims. The trial would have been expected to have only one death in the treated group, and would have detected a difference more than expected by chance with 96% certainty.

There is observational evidence from Sweden of reduced covid-19 hospitalisations and deaths (not from all-causes), however, the vaccine effect diminished to zero for all three outcomes eight months after the date that the vaccine was administered.

To compound the confusion about the effect of the vaccine, the original Pfizer trial now is marred by whistle-blowers who have given the British Medical Journal evidence of fraud occurring during its conduct. Sixteen Swedish doctors have now called for the injection to be suspended as a result of these revelations.

Both Jackson and RNZ use extensive use of ad hominem attacks, which are considered an invalid, and lowest, form of argument.

The purveyors and writers of such ‘argument’ appear to have no embarrassment at the anti-intellectualism and inhumanity of their conduct.

We’ll stick to the contest of ideas by again considering Jackson’s accuracy. Back in August 2020, Jackson and his colleagues claimed that elimination was still the best strategy for New Zealand to tackle covid-19. That article has not dated well, yet the personalised tirade and arguments are familiar.

“He [Thornley] is the only dissenter in the epidemiological community,”

“It’s not like this is a discussion like a boxing match with two equal partners. What you’ve got is every experienced epidemiologist in the country supporting the Government’s elimination approach.”

“We are all advising the Government, and we speak with one voice. And you have got a junior epidemiologist who is presenting a different case.”

Jackson has made increasingly inaccurate claims during the pandemic, claiming, unchallenged that one in five infected people will be hospitalised after infection with covid-19. No media have ever fact checked this.

New Zealand’s own government data shows Jackson  overestimated by at least a factor of ten, since the proportion of cases (rather than infections) hospitalised is 2% (table).

As sailing great Russell Coutts has recently pointed out, it is questionable how “media entities can maintain objectivity when they have accepted a government grant that is conditional on them promoting certain government policies”.

It is prudent to check all sources of information, not only those who dare to question the what is coming from the Beehive.