Covid hysteria has highlighted the strange human tendency to want to believe the worst. No matter how bad something is, we are fascinated by the possibility it could be even worse.

Journalists are subject to the same psychological trait, but are also driven by their job to find material that escalates the fear.

An example is news coverage on whether SARS-CoV2 transmits from surfaces.

Media looked for people to confirm the possibility, then leaped onto research that confirmed it was possible.

Look at this shocking report on Reuters that focused on a CSIRO finding that Covid particles could live for up to 28 days. The report kicks off by saying the finding underlines the need for protective measures like hand-washing. The story includes video of HAZMAT suited research personnel running tests. The pairing of these signals effectively makes a conclusion from the research that live virus on surfaces is a real way of picking up a dangerous virus.

Information in the article which should provide context that lessens fear, such as mentioning it was a controlled environment, is present, but without any similar sort of conclusion for the average reader.

This is absolutely critical to the misleading nature of the story: the presentation of fear-inducing information (the fascinating news angle) is provided with scary comment and editorialising, but information that could lessen the fear is sparse and not explained.

Unfortunately, researchers live in the same world, influenced by the fear of authorities, funders and media. So there were motives to study surface transmission, and to highlight findings that suggested it was possible.

The CSIRO made almost no attempt to put the findings in context or lessen the hyperbole.

The result of these news reports to the public (and therefore to politicians and other authorities) that inflated and distorted the findings. 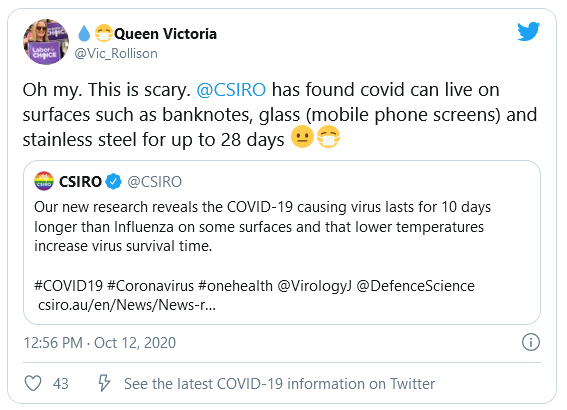 To be fair, some media did report properly. For example, it turns out that the CSIRO study was done in the dark! Light is a known anti-septic. The BBC noted this, but only after some experts were brave enough to point out these sort of context-relevant facts.

Bizarrely, a Lancet piece as early as July highlighted the exaggeration of the risk. Emanuel Goldman concluded:

the chance of transmission through inanimate surfaces is very small, and only in instances where an infected person coughs or sneezes on the surface, and someone else touches that surface soon after the cough or sneeze (within 1–2 h). I do not disagree with erring on the side of caution, but this can go to extremes not justified by the data. Although periodically disinfecting surfaces and use of gloves are reasonable precautions especially in hospitals, I believe that fomites that have not been in contact with an infected carrier for many hours do not pose a measurable risk of transmission in non-hospital settings. A more balanced perspective is needed to curb excesses that become counterproductive.

By the November and December of 2020, the truth began to be properly reported. https://www.nytimes.com/…/world/asia/covid-cleaning.html.

It’s unclear what was going on that led to a media willingness to report this. Perhaps it might have been that there were sufficient other vectors for transmission that could be worried about. Certainly the mask issue was rampant at that time, with media backing up the official masking policies.

This coincided with another conclusive study in the Lancet. https://www.thelancet.com/…/PIIS2213-2600(20…/fulltext

Yet even in March 2021 the surface myth was persisting. Companies and organisations boasted of “deep cleaning” their premises in Auckland, NZ when the city locked down after covid cases were found and their movements tracked.

Even when being ‘critical’, media conformed to the surface-danger narrative. A New Zealand Herald story quoted a microbiologist warning that deep cleans were unlikely to get rid of the virus from the surface. Never mind that lots of research had already shown that the virus particles were unlikely to alive, or lead to infection, in the first place.

So it’s clear that media have not reported Covid information accurately or in context, fueling the Covid hysteria in 2020. They have been enabled in this by academics and researchers who either already distorted in their research, or found it difficult to convey the detail, or were drawn and mesmerized by the publicity into focusing on messages that made things look worse.

To top it off, most of us were almost gleeful to see the news, and convey to others: we thought it was bad, but it’s even worse than that!